Me and Reba McEntire

I watch "Who Do You Think You Are" faithfully. Although I am extremely jealous of the research done for the celebrities, I watch because I learn something in every episode. On a few there have even been connections to the research I'm doing.

When the Reba McEntire episode aired, I figured I'd watch just for the genealogy tips, not expecting too much of a connection with the country western star. It was a great surprise then to find that there is a huge connection between our families.

According to the episode, all Brassfields in America come from that first George who came over as an indentured servant at the age of nine  from England on the ship Loyalty. I have been able to trace my ancestor back to 1865 in Gibson County, Tennessee. So far I have found precious little about him even though his name is very unusual. In fact, I'm not sure what his name is. When I look at the original documents it looks like Danic or Domic. It has also been transcribed as David and Derick. That's part of the problem in finding him. But I do know that he was copper in color because I found the Freedmen's Bureau's marriage license when he married my great great grandmother Susie! 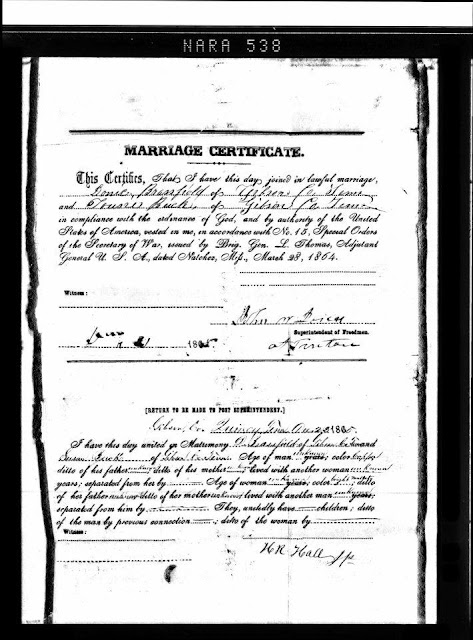 This is so cool! Best of luck in your search for your Brassfield line!

Thanks, Miriam. I'm working on it.