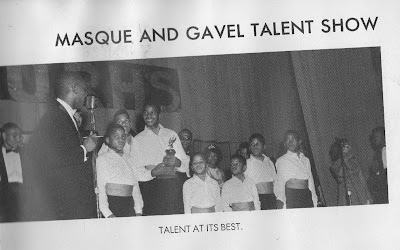 A blast from the past. The Jackson 5 in 1966. I think Michael is on the bongos in the top shot.
Posted by Jennifer at 6:10 AM No comments:

Michael Jackson - a part of HIStory

It was a shock to hear of Michael Jackson's death. He was born in my hometown so he is a part of my story. More importantly, though, he is a part of world culture's history.

I remember seeing posters about the Jackson Five on light posts all over Gary all the time. They constantly were performing. The family grew up in the shadow of Roosevelt High School, my alma mater. The boys were always performing on the talent shows and always won. My husband's claim to fame is that his jazz combo beat the Jackson Five in a talent contest there. It was unheard of for someone to beat them. In my high school yearbook there is a picture of the Jackson Five performing at the Masque and Gavel Talent show. This was before they became a national phenomenon. Jackie, Michael's oldest brother, even sang in the Madrigal Choir, the elite singing group of my school, with my sister.

The citizens of Gary were so proud of the Jacksons. We got bad press all the time but we could point to the Jacksons and Avery Brooks and Deniece Williams and William Marshall and Ernest Thomas of "What's Hapening" and say Gary can't be all bad. It produced all these people.

Before Michael Jackson, music was divided by race. He changed that. That was monumental. Today's generation doesn't realized that. He transformed the music video into a necessity for marketing music.

I am so very sad. I have always been a fan and ignored the bad publicity that followed him. He is gone too soon like his song. And like his song, we never can say good bye. He was not just a super star. He was a super nova, shining so brightly and extinguishing too quickly. Rest in peace. The king is dead. Long live the king.
Posted by Jennifer at 5:32 AM 1 comment:

I am giving my first genealogy workshop this Saturday, June 27th. This is not a stretch for me since I teach already and I love talking about genealogy. The workshop will concentrate on the two most important steps in genealogy--the beginning and writing it down.

It is being held at Indiana University Northwest, Hawthorne Hall Room 332, 3400 Broadway, Gary, IN. There are two sessions. The first one begins at 10 am. It will focus on just getting started with the research with an emphasis on African American genealogy since that is my area The second session starts at 12:30 and will give tips and strategies about writing the information and publishing it so that it can be shared with others.

It is free and open to the public. I'm not sure how many will come. I suck at marketing and promoting myself. But like I tell my students, if only one comes, the show goes on.

I first planned this workshop to raise a little cash for my road trip to Mississippi and Tennessee. I'm leaving in July to do more research on my family. I decided to make it free just because I want to share what I know just for the love of it.
Posted by Jennifer at 4:06 AM 5 comments:

I can't believe it's been nearly a month since I posted. The last post is appropriate for this day too. I do miss my father.

Father's Day has become a forced celebration because both my children and I are fatherless. But it is a celebration of memories and good times, so I cling to that.
Posted by Jennifer at 4:02 AM No comments: