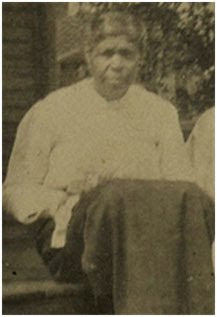 Would you believe that I have had that conversation? After renewing my research on the Featherston family, I came across someone on ancestry.com who was also researching Charles Featherston and Matilda, my great great grandmother. I almost couldn't contain my excitement. Of course, I contacted the person immediately. After several tries, I finally spoke with her.

I am not disclosing her name for privacy reasons but she was an individual who was related to Matilda's daughter Dollie's husband. She had photos of Dollie Melvina and her family. Even more important, she had interviewed Dollie's granddaughter. According to the granddaughter, Charles' family knew of the relationship and children between him and Matilda. After Charles died, his sister visited them often and sometimes contributed financially to the family. The sister believed that this was a love story! I didn't even ask the question. It was volunteered. See, my questions were answered posthumously.

However, there is a bone of contention here. Dollie's granddaughter disputed the love story idea. Maybe the love was only in Charles' mind and not Matilda. Maybe the children resented the situation. Consider the idea of a relationship between a slave owner and his slave. You can romanticize it but the fact remains one person owns the other. That is the definition of statutory rape.

But I am not dealing with that at this moment. It was just so fantastic to see the photos and hear new stories. It has energized me and opened up new avenues to research.

The photo is of Katie Featherston Wilkins Hardy Warren ? She may have married again. Katie is Matilda's daughter, sister to Dollie Melvina and my great grandmother. My grandfather looked like Katie. In the photo that I saw, Dollie looked like an elderly white woman. According to her grandson, she was often mistaken for being white when she was riding in the "colored" section on the train in Tennessee. The conductor would put her in the "white" section.
Posted by Jennifer at 6:42 AM 1 comment: