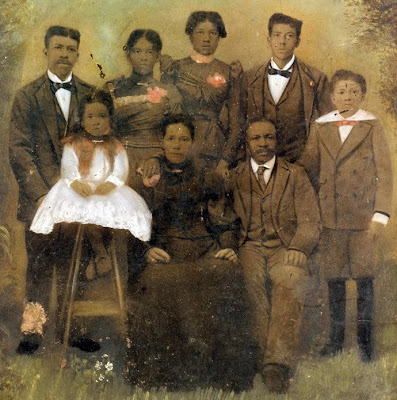 Above is a photo of James and Jane Koonce and family.

Real life has been intruding but I'm doing fairly well at not getting off track when it comes to focusing on my research.

I was finally able to talk to a cousin I met during one of the Koonce family reunions. She answered one of my questions about the family oral legend. All of my life I have been told that part of my heritage was Cherokee. I remember looking years ago at a pictorial history of native Americans and noticing one lady looking so much like my grandmother. I thought that blood line was through the illusive Amy. However, I have almost eliminated that possibility due to the fact that the trend toward enslaving native Americans ended before Amy was probably born.

My cousin Barbara told me that my great-great grandmother Mary Jane Roberts Koonce was half Cherokee. Her mother, Judie, according to Barbara, was a full-blooded Cherokee. Here's the thing that surprised me. Mary Jane Roberts was not black at all. According to Barbara, her father, unknown, was white. Barbara says that Judie and Jane arrived in Tennessee in a wagon. They stopped because they were tired. Judie subsequently married Will Roberts who was not Jane's father. She also tells me that Jane's half-siblings were much darker than her.

Barbara didn't seem to know that Jane had an older brother named Joseph and younger sisters Partuna and Willie who were all said to have been born in Alabama. I have found them on the 1870 census in Haywood County, TN. There is also a one-year-old brother Edmond born in Tennessee. The elder Willie is also said to have been born in Alabama. Barbara's story seems to be that Judie and Jane came alone. She had surmised that they may have been part of the "Trail of Tears." After further research I know that this is impossible for Jane. The Trail of Tears for the Cherokee nation took place in 1838. Jane was born in 1861. Judie was born around 1825 so the legend may be about Judie and her mother (unknown). Barbara also recounts that Jane would often take trips to Hot Springs, Arkansas and some place in Oklahoma. She didn't know why but assumed there were relatives there.

This is another example of why you can't believe word for word the oral legends. You must investigate and verify. It is also an example of how when one question is answered another question is formed. I love genealogy!
Posted by Jennifer at 6:47 AM 4 comments: