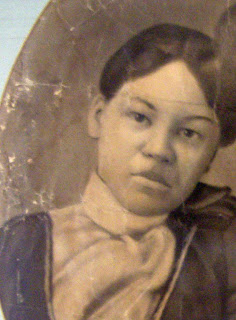 I read some advice just in the past week that when researching Black ancestors, one should concentrate on one line. This advice was given because of the unique circumstances we face in trying to figure out who our ancestors are. I fundamentally disagree.

I've been researching now for 15 years. Sometimes I get so frustrated with the lack of results that I take a break. I take a break but I never quit and one of the things that keeps me going is that when I end up on a dead-end street for one line, another line still has many avenues I can explore. Finding even the most minute detail that had been hitherto hidden is enough to keep my genealogy juices pumping.

This is what has got me going right now. I always knew that I descended from Brassfields but very little else. My grandmother's mother, whose portrait hangs in my mother's home, is Lizzie Brassfield. Her father was D. Brassfield. Whenever I would try to find more about him I would get stymied by bad transcription. He had an unusual name. Now you would think that would make it easier to find him. Unfortunately not. When  20th century transcribers look at his name written in that archaic handwriting, they come up with modern names and that makes him hard to find in a search. I have looked at the original documents and see Domic or Danic. The transcribers on ancestry.com see David. This is the name picked up by familysearch.com. But I digress.

Since watching Who Do You Think You Are and its episode about Reba McEntire, I have been more curious about Grandpa D. Using information from tngenweb.org I think George Simpson Brassfield of Gibson County, Tennessee was his last slave owner.  Looking at the slave census for 1860, there is a male slave who is the right age for D living on George's farm. I have also found out that George's step-father had a larger farm with three times more slaves during 1850 and 1860 than George.  And the trail doesn't end there. I'm finding a trove of information about George that may eventually lead me to Grandpa D's origin.

So now I am energized once more. I feel like I'm one of those celebrities on WDYTYA except I am the one doing all the hard work and making the wonderful discoveries. And that feels good.

It looks like you have Lizzie's cheeks and chin and nose. Wow! I sure hope you are able to learn more about your Brassfield line.

Even before I got to the 1870 break wall on practically every line, I've always disagreed with the one line rule.

And I understand about the breaks seeing as I had a really big one in my research.

Forgot to add that I love the new look.