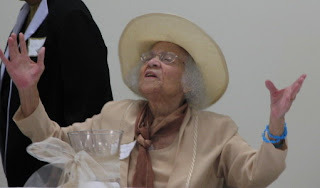 My great aunt turned 102 years old November 4th. She lived to see what many of her generation thought impossible. That implausibility was that America could elect someone president based on his ideals and his message and not the color of his skin. It gives me hope.

Last week I talked with my younger co-workers about the election. They found it exciting because they felt a part of history. It made me think back about how many historical moments I have witnessed in my life. Elvis Presley's "Hound Dog," the invasion of the Beatles, Hippies, Martin Luther King's march on Washington, the civil rights struggle, the assassinations, the wars, 911. And now this.

I have no illusions about Obama's presidency. He has a very harsh world of problems to face. But I do feel as many that this is a transformational moment. Change is not just a noun or verb. It is a movement. And I am alive to experience. Hope and awe.
Posted by Jennifer at 4:04 AM