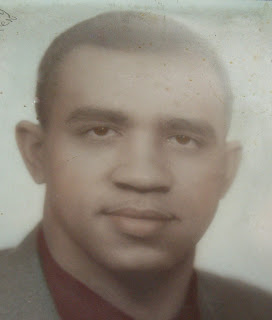 This is a day set aside to remember our fallen heroes of the various wars. My family's tradition is like most in the country. We barbeque, relishing the fact that the weather is now warm enough to enjoy eating outside. When I was young, Memorial Day also meant parades. Gary had the best parade on that day. For a couple of years, I was in the parade, part of the Roosevelt High School marching band. I played a french horn--the "pah pah" part of the "oomp pah pah," the musical beat of every marching band. I hated it. I never got the hang of trying to keep my lips on the mouthpiece as I marched and followed the leader. And "pah pah" was so boring. I dropped out. But I digress.

We have now added a new part to our Memorial Day tradition. This is the day we visit the cemetery. It is usually very crowded on Memorial Day. Sadly, there are too many loved ones that reside at the cemetery. My father and my husband are there. Minutes are spent wondering around the graveyard trying to locate various others deceased relatives. Not a happy tradition but a respectful one.

My father, Stanley Cotten, was a veteran of World War II. He was part of the cavalry. When I would tell my fellow high school students that, they would ridicule me. They didn't know that the army still had a cavalry during that time. There once was a photo of my father, his friend Jay and one of the horses. I don't know if it still exist but I will search for it. My father spent a lot of his time in Rome which he never appreciated. Maybe it was because of what he had to do there. He didn't speak much about it except to say "if you've seen one place, you've seen them all." He did not share my love for travel. I do know that he saw the Colosseum. It may be during the war that he developed his hatred for flying too. I'm not sure. Unfortunately he is not here for me to ask him.

Currently, one of my nephews is serving in the Marines. He has made a career out of it. He has been deployed to Iraq once again. He has also been based in Japan and South Korea. I'm sure my father would have been proud of him. Erik Wilson was his first grandchild, a boy after having nothing but daughters. He was the light of my father's life.

So on this holiday I will remember the loved ones that are gone. I will also honor and pray for my nephew and others who are serving this country in the different branches of the armed forces. They are living heroes.
Posted by Jennifer at 5:23 AM