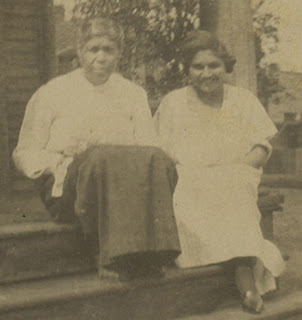 As already stated, I have a wealth of information about my grandfathers, greats and otherwise. My grandmothers are a lot harder to flesh out but I'm not giving up.

Last week I discovered that my great-grandmother Katie Featherston, the woman on the left in the photo, had even more children than I was previously aware. I happened upon it after looking for information for a cousin by marriage. The cousin is a Wilkins and had heard of Katie. She tried to put two and two together but it didn't add up to four.

Katie married Tom Wilkins in 1881. By 1898 she was married to a Henry Hardy. On the 1900 Dyer County Tennessee census, she listed all her children as Hardy's. Not only that, she stated that she had been married to Henry for 16 years. Not true. She also stated that she gave birth to 11 children but only 6 were living. That math didn't add up either. On the very same census eight children are listed. Obviously the younger 6 were hers from her first marriage. The census taker didn't catch that or didn't care.

Two years later she is married to my great grandfather Ike Warren. By the 1910 census only my grandfather and her youngest child by Wilkins, Joseph, are living with her. She states here that she had three children but only one is living. The census taker didn't correct her again.

These are just some of the discrepancies genealogy geeks have to weed through in our search.
Posted by Jennifer at 1:56 PM