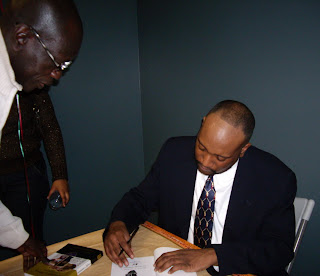 Saturday was an inspirational day as far as my genealogical journey is concerned. I went to Chicago for a book signing. The author is Melvin Collier. The book is Mississippi to Africa."

I met Melvin on Facebook. He mistakenly thought I was a cousin but he was correct in identifying my obsession for genealogy. I have decided I want to be him when I grow up. First, he was able to trace some of his ancestors back to Africa. That is monumental and downright impossible for many Black Americans. Secondly, he has been able to distribute and sell his book all over the country. Although my book is finished, I have only sold a few copies to relatives. He sold out of copies at the Chicago book signing so I haven't been able to read it yet. I want to find out more about how he was able to trace his ancestors so far back even though my Mississippi relatives come from a different part of the state.

At the signing was Dr. Rick Kittles of African Ancestry DNA. Dr. Kittles wrote the forward to Melvin's book and was instrumental is narrowing down where Melvin's ancestors came from in Africa. Although I am skeptical whether the genetic database of the company is large enough for accurate testing, Dr. Skittles insists that the database is large enough. The price is hefty too. He quoted me $275 but I have noted that the fee can go over $300.
What was most impressive for me at the book signing though was the number of people attending and the great enthusiasm for information. It made me feel like I was a "cousin" after all.
Posted by Jennifer at 7:36 PM