This blog is sometimes just me talking to myself, working out problems.

I got an email from Benjamin Cotten, my newfound cousin. He has been so inspirational to me. He sent me information about a Hiram Cain who got a land grant in Mississippi in 1898. He could be the brother to Napoleon Cotten. Following the advice from the convention, I looked up Franklin County, the county of Hiram's land grant. It is next to Amite where I first found Napoleon's family.

I looked at the 1900 census again. This is the one where Napoleon reappears after being missing (to me) since 1870. A few lines down is his mother and brother Richard. I just noticed that Winnie said all her four children are still living. That means somewhere Hiram and Elizabeth is hanging around just waiting to be discovered.

Napoleon is living next door to his in-laws also. These in-laws are also my ancestors, related to me through Mary Saunders, Napoleon's wife, my great-grandmother. Charles and Rose are a few doors away. It got me to thinking that maybe Elizabeth is nearby. There happens to be an Elizabeth who is the right age living next to the Sanders. I know. I know. That means nothing. But it is a splinter of possibility.

I'm trying now to research that possibility on ancestry.com and I am becoming so frustrated with the database. No matter. I am newly inspired and recharged.
Posted by Jennifer at 7:28 AM 3 comments: 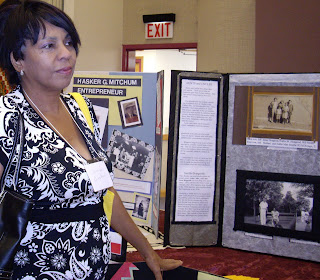 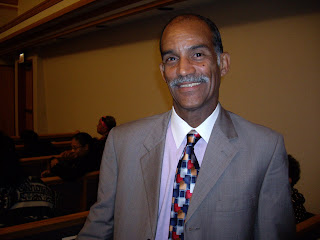 A photo of me and a photo of Tony Burroughs at the convention. Not together unfortunately. I wasn't thinking.
Posted by Jennifer at 6:49 AM No comments: 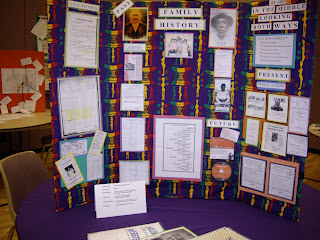 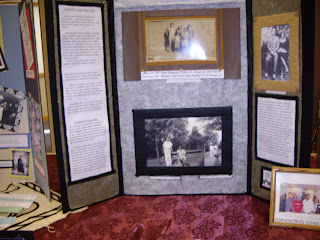 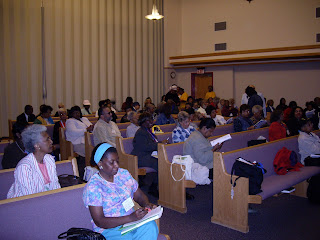 The convention in Chicago was so inspiring and informative but it made me even more frustrated. The keynote speaker, Dr. Abbott, spoke on finding a needle in a haystack. That's an analogy for genealogy enthusiasts's efforts in trying to find Black ancestors past the 1870's. She made us see that it wasn't impossible but that it will take a lot of work and a lot of thinking outside the box or sometimes, outside the counties we think our ancestors are located.

I came back all fired up and ready to go. I looked in some of those places that were mentioned at the convention--The Freedmen's Bureau, The Southern Claims Commission, and Familysearch.org. And still my ancestors remained elusive. I know that it only means I need to dig a little harder and get my hands dirty. I have to go to the places where they lived and not just sit in my pj's surfing on the web for the information.

Still it was good to network with all those people of like minds. I was able to meet Tony Burroughs in person and got his photo. And I also got to see Barack Obama's house. It was down the street from the church where the convention was held. All in all, it was a very good day.
Posted by Jennifer at 5:56 AM No comments:

This weekend the African American Genealogical and Historical Society of Chicago (AAGHSC) is holding their 2008 Conference at 5200 S. University Avenue in Chicago. The 26th Annual Family History Conference is being hosted by the Church of the Latter Day Saints (Mormons) which is located at that address. The theme of the conference is "Starting, Restarting, and Continuing Your Family History."

It's a two-day affair. My genealogy group is going just for the Saturday session. The keynote speaker, Dr. Deborah Abbott, will speak that morning on "Finding a Needle in a Haystack." Dr. Abbott is the president of the African-American Genealogy Society of Cleveland, Ohio.

I'm really looking forward to this conference. Not only will I learn more tips and strategies to help me in my research. I will also be able to network with people of like mind when it comes to genealogy. Plus, with it being at a Mormon church, I'm hoping there is a library where I can do some actual hands on stuff.

If you are interested in attending, you should contact the society. The email address is aaghsc@yahoo.com. For more information, their web page is http://www.aaghsc.org.
Posted by Jennifer at 10:37 AM No comments: