Things I learned on my road trip 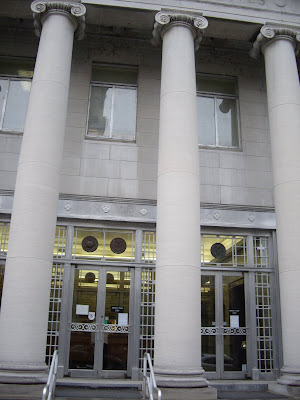 I'm home. My trip was relaxing, fruitful, hot. I'm glad I went but I didn't accomplish as much as I hoped.

We stayed in a very nice hotel in the Brentwood neighborhood of Nashville. We got a very good deal. Tip #1- The research is the priority, even over good hotel deals. Everything else is secondary. Tip #2 - if you can, stay closer to the libraries even if it may cost more. Traffic takes away time you can use in the library. Also, if you're with someone, you don't have to depend on them for transportation. They can leave or you can leave on your own time schedule.

From Nashville we went to Jackson, TN. My ancestors come from this area. At the Crockett County library I found a will for Joshua Nunn for 1831. This Joshua was Francis' brother and David's father. David Nunn was the administrator of Francis estate and the executor of Joshua's. He was also the brother-in-law of Isaac Koonce, the last slave owner of Solomon.

On this will is listed many of the same names of slaves found on the inventory of Francis' estates. Joshua died in North Carolina. In 1830, Francis bought land (over 1000 acres) in a part of Dyer County that became Lauderdale County. I think Francis may have acquired some of Joshua's slaves from his nieces and nephews for his land. One of the slaves name was unique-Britton. That's what made me think this. One of the other slave is named Sall. I think this may be Solomon. It's a leap, I know, but it makes sense to me.

Tip #3 - It sucks when the persons you're looking at have no heirs. Heirs want to know their heritage. Without them the trail goes cold. Isaac Koonce had no heirs. This Francis Nunn had no heirs. It is more difficult to find background information concerning their lives but I trudge on. It also makes me work harder to leave information for future generations.
Posted by Jennifer at 4:56 AM 3 comments:

On the road, finding clues 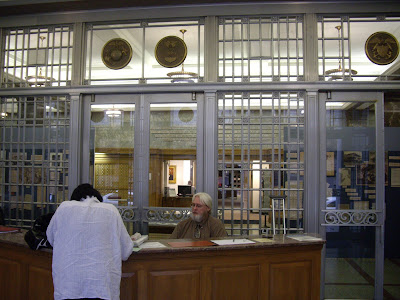 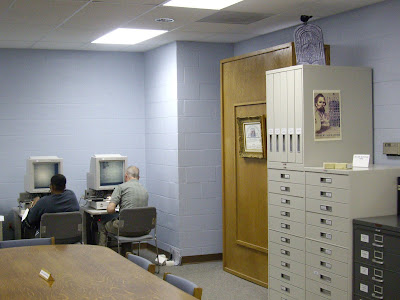 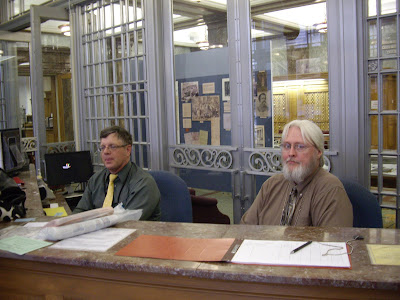 I got out of my comfy chair and hit the road so I could find more answers to my ancestry. This year I'm concentrating on my maternal line so I headed toward Nashville. First stop, however was St. Louis. My cousin and genie buddy lives there and she is sharing the journey literally and figuratively.

We stopped at the archives bright and early Friday morning. For me, it was slow going but I kept going. The one thing I wanted to learn was what estate Solomon Koonce, my g-g-g grandfather came from before being sold to Isaac Koonce. The receipt said "from the Nunn's estate." I looked for data on the Haywood County book and figured out that the only Nunn it could be was Francis. However, I couldn't find the will.

A librarian showed me a book that had the index to all the wills in Tennessee. I looked for Francis Nunn and found three. One died after Solomon was sold. Two died around the right time but neither were in Haywood County. One was in Williamson county and the other in Lauderdale. I thought I had hit a dead end but I looked up the microfilm any way.

There was no mention of Solomon on the will in Williamson and I think I pulled the wrong microfilm for Lauderdale because I couldn't even find Francis Nunn on it! I was getting frustrated and discouraged but I went back to the Lauderdale microfilm again. This time I found Francis Nunn and, hallelujah, I found Solomon! He was listed among 27 slaves.

It is also possible that Amy, my great great great grandmother is among the 27 slaves but I'm not sure about that one. There were some discrepancies concerning the names. The names are listed in two places-one in the inventory and one in what happened to them during the interim before being sold. Amy is not listed in the inventory but she is listed at the end. I believe she is called Ann in the inventory but Amy in the last list. I also surmise that she is very young because they don't sent her out to hire like some of the others. Instead they use some of the money as expense to take care of her and several other slaves. Solomon was hired out but for a lower amount than some of the others. I think that is also because he is young, around 12 years old, or possibly of a small stature.

Regardless, this alone has made my trip worthwhile. Everything else is gravy.
Posted by Jennifer at 5:15 AM 1 comment: