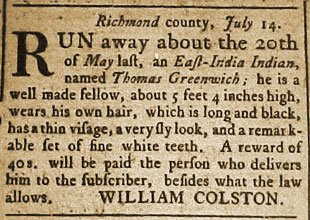 I keep getting reminded of this rule all the time in one way or another. I assumed that my g-g-g-grandfather couldn't be a slave captured from Liberia. While I haven't corroborated this--it is stated on the census that his birthplace is Virginia--I did find out that there were native Africans on the land before it was usurped for the imported freed slaves. There was naturally a lot of tension between the natives and the "Americo-Liberians." The Americo-Liberians were always considered foreigners not citizens by the natives. Liberia was even used as a temporary shelter by Americans for re-captured slaves for a while. So it is possible that maybe John's father did come from the land renamed Liberia. I know that his son, my great grandfather was very dark.

Then about Catherine being an east Indian--it is possible. I followed the lead of fellow blogger Miriam and googled east Indians as slaves. To my surprise, I found that east Indians were part of that melting pot that made up Jamestown in the 1600's. According to Francis C. Assisi (I don't know if that's his real name or his pen name) in an article for the India Currents, east Indians were brought to US shores as indentured servants and slaves first by the Dutch and then the French, the English and lastly the American captains. So it is possible that Catherine was part east Indian.

So I am reminded once again, don't jump to conclusions or make general assumptions. Research, corroborate, and verify.
Posted by Jennifer at 4:56 PM

I agree - the number one mistake I am guilty of is making assumptions. But the best remedy just seems to be to keep looking and collecting information.