Last year, nearly to the day, I wrote:

This last belief confounded me. Well, they all confound me but the last one was a new one on me. Although I am amazed that there are some people out there (really out there) that ascribe to this notion and at their ignorance, sadly, I am not surprised.


This belief was observed by a member  of a Facebook genealogy group I belong to. He posted 'I work in Gettysburg doing tours at the Farnsworth House. I do afternoon historical tours of the house and I talk about the battle in that corner of the town. We have some historical documents framed and hanging on the walls. One is a bill of sale for a slave from Virginia. Last year I had two African American young ladies 17 and 18 from Uniontown PA (south of Pittsburgh) on my tour who upon seeing that told me that they did not believe that slavery ever existed. And that documents like that were just white peoples ploys to keep black folk down. I asked if they took history in high school and they replied that history doesn’t matter.'”

These young ladies chose not to believe a distasteful part of their history. Instead  they decided to use the ostrich method of dealing with it.

About a month ago, this screenshot was posted on the same Facebook genealogy group. 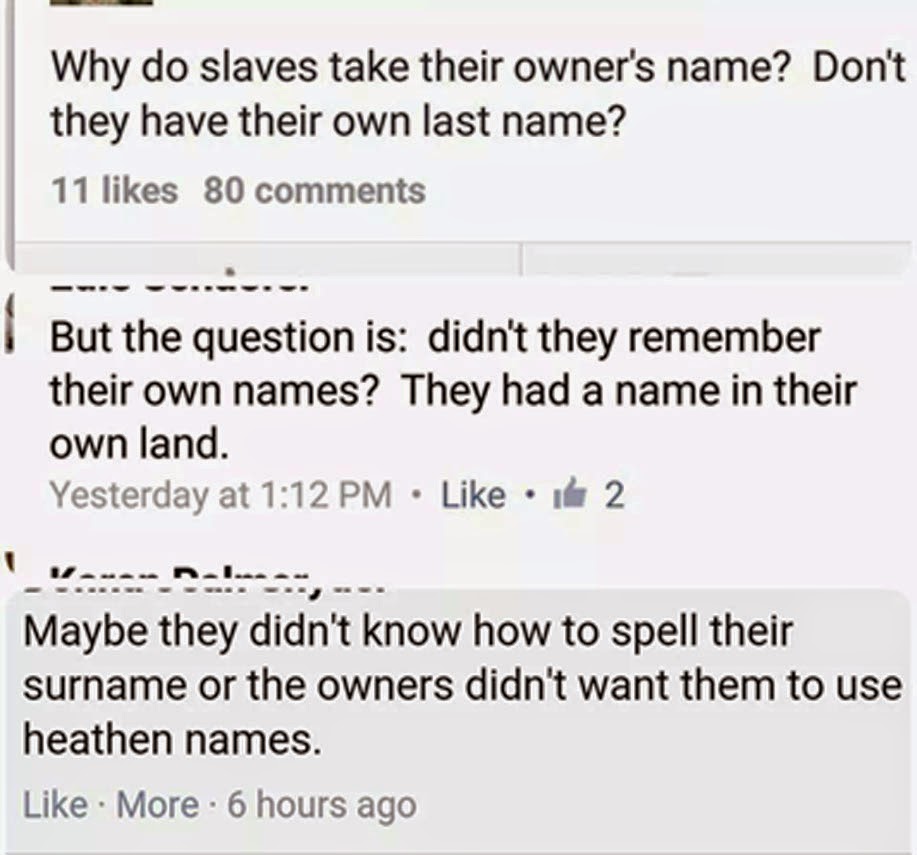 I can only assume that these were also young persons involved in this conversation. At least, I hope so. All I can do is shake my head.

It is said that those who do not know, learn, ignore (choose whichever word you prefer) history, are doomed to repeat it. Kurt Vonnegut says "“We're doomed to repeat the past no matter what. That's what it is to be alive." Looking around at current events, it looks like Vonnegut is right. However, I keep the faith that learning about our history will make us better.
Posted by Jennifer at 3:07 PM

Jennifer,
Just discovered your blog (thru GeneaBloggers) Congrats.
Also love, and totally agree with your blogs from this one forward.
Excellent comments. I am a mature white female and am appalled by what is going on, and being said, in this country. Can only hope saner heads prevail. As for history: those girls ignoring history does not change the historical FACTS.
Keep up your great blog.
Linda J.